The 2017 Granite State Warrior Awards were presented at the chapter's luncheon on January 27, 2018.  Read the write-up of the luncheon on the "Program Notes" page.  The presentation to Sig Sauer was also written up in the Portsmouth Herald.  Read the article.

The Board of Directors of the chapter voted at the May 2016 Board meeting to honor Joe Byron, founder of Honor Flights New England, for all his time, effort and hard work in organizing the program which allows WWII veterans (and a sponsor) to fly round trip from New England to Washington, DC to visit the WWII Memorial, by making him an hororary member of the New Hampshire Chapter of MOAA.  Shown here is chapter member Col Sanford Way, USAFR (Ret.) [Left] presenting the Certificate of Honorary Membership to Joe Bryon. 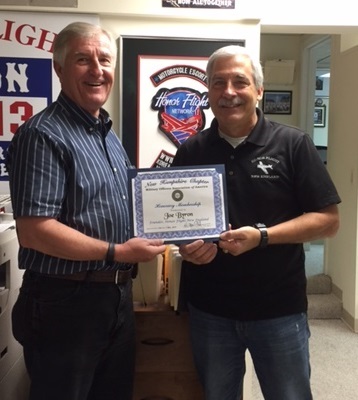 THANK YOU TO THOSE WHO DONATED CLOTHING FOR LIBERTY HOUSE

The following is a thank you note from chapter member CDR Sharon Day, USN (Ret.) to those who contributed items of clothing at the chapter's January luncheon in support of Liberty House.

The Liberty House clothing drive, part of our chapters Veterans Community Outreach Program, culminated at the January MOAA-NH luncheon.  It was very successful- over 30 bags of clothing and 10 sleeping bags were delivered to Liberty House on 4 February.  The veterans, mostly homeless, needed winter clothing and our members were generous with jackets, coats, sweaters, socks, gloves, etc.  Thank you so much to all who helped our veterans by donating items and making online monetary donations.
To make any additional donations please visit the Liberty House website www.libertyhousenh.org for information on the types of items needed and where to deliver them, or to make a monetary donation.

Here is a picture taken during delivery of the clothing items.  Thanks should also be given to chapter members CDR Roby Day, USN (Ret.) (Sharon's husband) and LTC Gary Terhune, USA (Ret.) and his wife Judy for their help in delivering the goods. 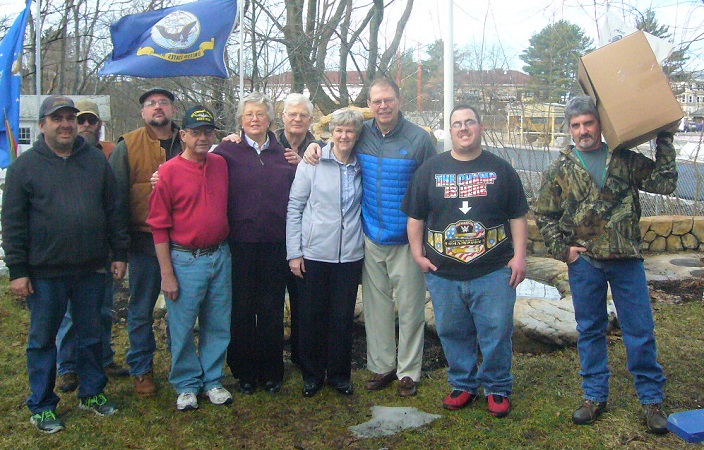 Liberty House in Manchester, NH has been providing a safe, supportive, substance-free housing community for American veterans transitioning out of homelessness since opening their doors in 2004.  See the article on the "Odds and Ends" page for more information about Liberty House.

On December 17, 2015, chapter members CDR's Roby and Sharon Day, USN (Ret.) visited Liberty House to present the Executive Director, Keith Howard, with a check for moneys collected from various chapter events throughout the year.  The money is intended to help Liberty House purchase much needed gloves and other warm clothing (if cold waether ever arrives to NH!) for homeless veterans.  Shown here is Sharon Day, who was instrumental in organizing the donation, presenting the check to Keith. 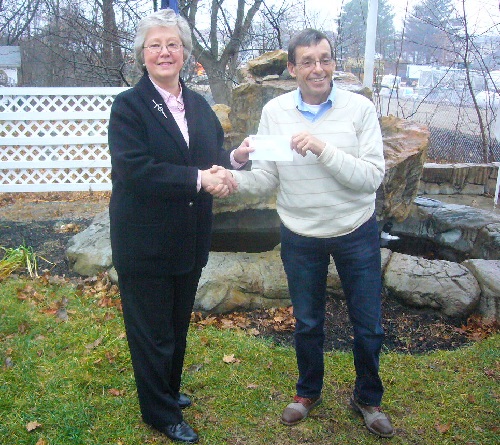 The New Hampshire Chapter was written up in the November 2017 issue of the Military Officer magazine concerning the 2017 Clambake held in August.  Click here to read the article.

The New Hampshire Chapter was written up in the August 2017 issue of the Military Officer magazine concerning the Granite State Warrior Awards presented at the April 2017 Luncheon. Click here to read the article.

The New Hampshire Chapter was written up in the July 2015 issue of the Military Officer magazine concerning the Granite State Warrior Awards presented at the January 2015 Luncheon. Click here to read the article.

Former Chapter President CDR Peter Burdett, USN (Ret.) was written up on the "Kudos" page of the August 2014 issue of the Military Officer magazine.  BRAVO ZULU Peter! Click here to read the article. 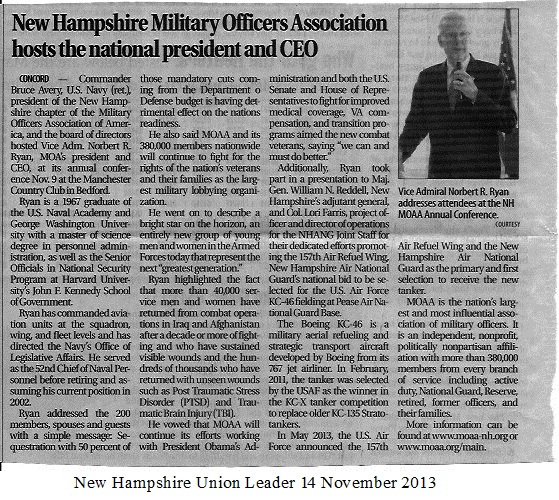 
2013 CLAMBAKE WRITTEN UP IN UNION LEADER 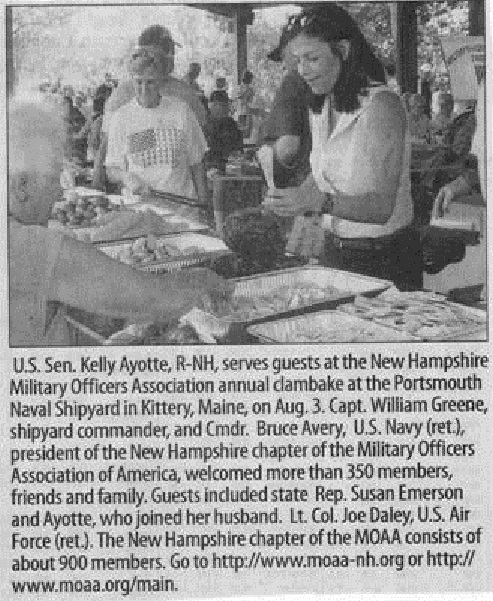 The New Hampshire Chapter was written up in the May 2014 issue of the Military Officer magazine concerning the Granite State Warrior Awards presented at the January 2014 Luncheon. Click here to read the article.

The New Hampshire Chapter was written up in two MOAA national publications.  In the February2013 issue of The Affiliate, the following mention of the chapter was made in the "TIP OF THE HAT" column:

...to New Hampshire Chapter members who presented the Granite State Warrior Award to the Pease Greeters who thank U.S.
troops passing through Portsmouth Pease International Airport in New Hampshire and to Wilcox Industries in Newington,
N.H., which designs and manufactures tactical gear for the U.S. military.
Members present the annual award to state residents or businesses that support members of the armed forces. Kudos for
recognizing patriots in the Granite State.

The chapter was also written up in the February 2013 issue of the Military Officer.  Click here to read the article.

The New Hampshire Chapter and chapter president, CDR Peter Burdett, USN (Ret.), were written up in an article in the January 2012 issue of New Hampshire To Do magazine.  Click here to read the article.  It was reprinted with the magazine's permission.  The magazine is a good source of information on what to do in the state.  Recommend you pick up a copy.  For more information on the magazine and where you can purchase it, visit their website at www.nhtodo.com.

Meet Capt. Ann Darby Reynolds (MOAA-NH chapter member), one of the first four women recipients of the Navys Purple Heart during the Vietnam conflict.  My Purple Heart - One Vietnam Veterans Story of Survival.  On Christmas Eve 1964 in Saigon, Vietnam, Navy Nurse Ann Darby Reynolds stood at the window in her room as the enemy attacked, making the holiday less like Christmas and more like a massacre. Reynolds would go on to devote 26.5 years to the Navy, rarely speaking about the incident or her duty at Naval Station Hospital Saigon, but never forgetting what she called the most traumatic experience of her life.  Read her story in the attached article in the March 2011 All Hands.  Check out the photo of Darby Reynolds along with two other chaper Navy Nurses at the April 2011 luncheon.

On May 13, 2010, members of the chapter's Board of Directors toured the facilities at the New Hampshire Veterans Home at Tilton, NH.  They had an opportunity to chat with a number of the residents during the tour and to see, first hand, the new public address system for the home that the chapter partially funded.  After the tour, the Board held it's regular monthly meeting. 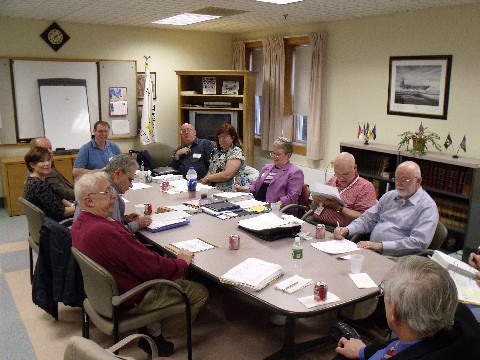 Board of Directors Meeting at New Hampshire Veterans Home

Chapter member Capt Ed Johnson, USMC along with Pease Greaters co-founder Chuck Cove received the Distinguished Service award from the Military Officers Association of America (MOAA) on April 20, 2010 in Washington, DC, for the group's efforts in meeting and welcoming military personnel who pass through the Pease Air Terminal in Portsmouth on their way to and from overseas locations.  Read the full article.

The New Hampshire Chapter supports ten JROTC units located at High Schools throught the state and ROTC units at Dartmouth College and the University of New Hampshire.  Chapter awards and MOAA medals are presented by chapter members to outstanding cadets at the various local schools' award ceremonies, as well as presenting an award to the outstanding Airman in the New Hampshire Air National Guard at Pease ANGB.  Below are pictures of some of the presentations. 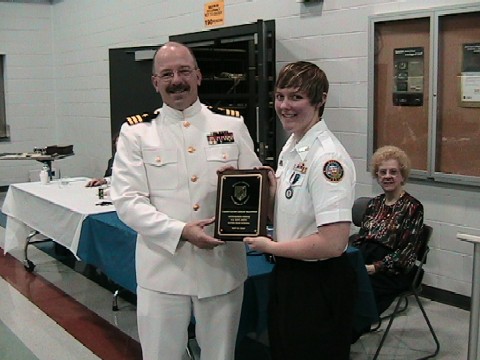 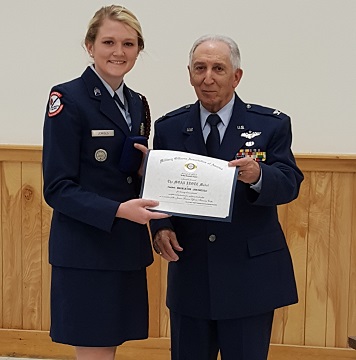 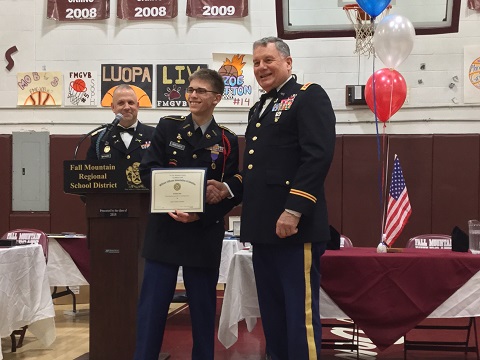 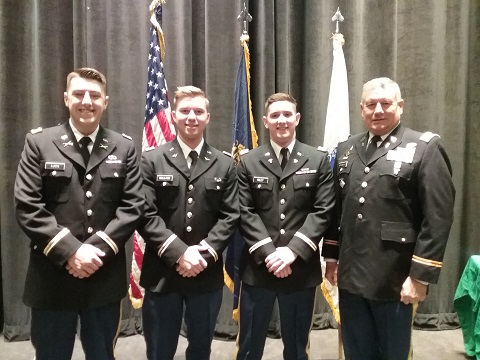